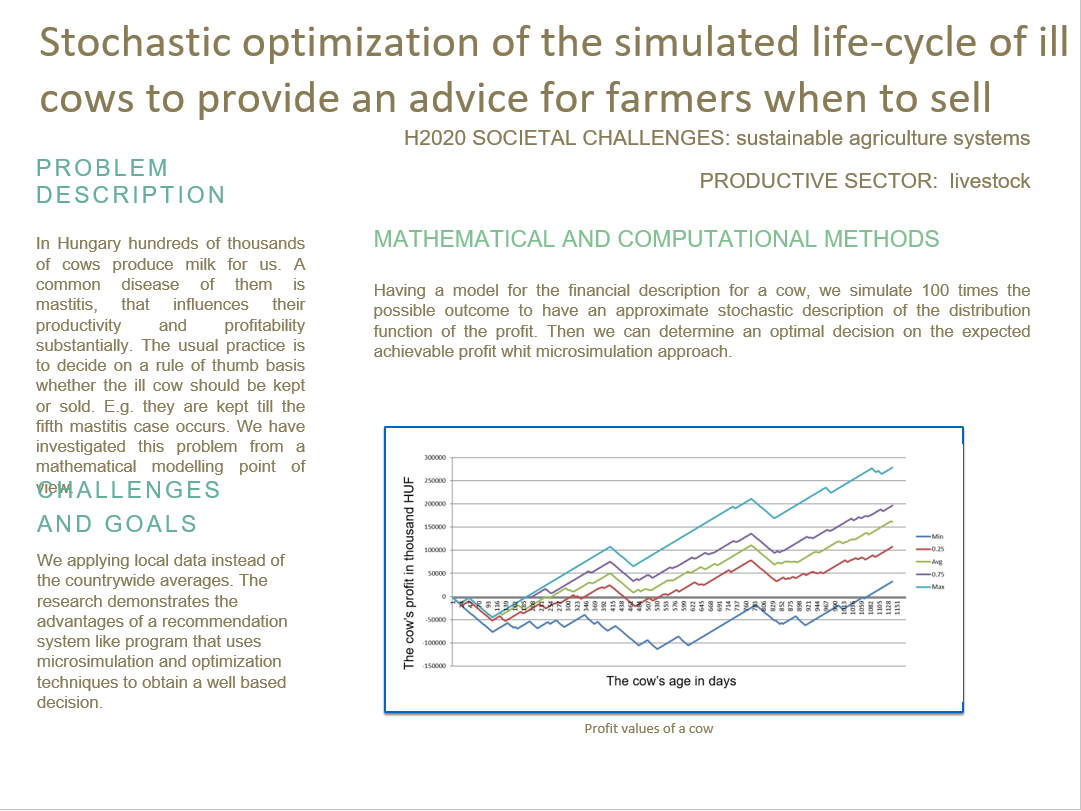 Given all the historic data of the dairy farm, our task is to determine how to model the economic decision problem in such a way that the user will become capable to decide on the keeping or selling of the given cow that became ill in such a way that according to the available data the most profitable decision could be met. In a different viewpoint, we aim to have a system that enables the farmers to optimize the composition of the farm’s cows for better profitability.

One of the most unpredictable, the most profit sensitive sector of the common section of agriculture and economy is milk production. Since the anticipated milk price is volatile, we have to design scalable models to get efficient solutions. We investigate the possibility of effective economic modelling of an important decision: when to sell the cow after a diagnosed new mastitis illness. After visiting a few local farms, and getting to know more about the problem, we can say, that usually they sell a cow when it is in a very bad shape.

So far it looks like a cow is treated with the proper medicine once it gets ill with mastitis, and it is kept – if it is not in a really bad shape that it has to be sold. Using some mathematics, simulations and programming we can estimate the expected profit of an animal if we keep it or sell it. This way farmers do not have to keep unprofitable cows.

A project like this requires close cooperation between programmers and agriculture workers. Using the most important factors of a cow’s life we have built a pretty simple but hopefully detailed enough model.

With just a few information we can simulate the future of a cow. The starting data includes some data about the cow from the age to the illness number. And we also calculated some probabilities to make our decisions more realistic from some historical data. For example with the higher number of mastitis it will be more likely that a cow gets ill again. Although the milk production of a cow follows a specific curve, the dairy cycle curve, according to our computational tests, to optimize the purchasing decision, we can assume that the milk production is constant within the dairy cycle.

All of the profits in different states of the cow can be calculated from the data which is collected in dairy farms, or using dispersion, or even using the daily data from local dairy farms’ databases.

With our microsimulation model we investigate the possible best way to decide when to sell the ill cow. The basis of our technique is to simulate the life of a cow on daily basis. In other words, we start with a cow of a given age, number of already suffered mastitis illness, and in a given phase of the dairy cycle. For each day we check a list of possible events in the life of a cow. If an event is possible then we generate a random number to simulate a realistic experiment. This way we generate a list of events for the rest of the cow’s life. So we can manage multiple events at the same time. For example we can keep on counting the lactation cycle days, while the cow is ill. While computing the possible events we use the same which were used during the calculation of our data. So the methods to determine the possible events can rely on fixed data, probability dispersion, or even a full list of historical data.

A few regularities can be discovered, like after a proper dry period, the milk production will resume. The cycle of that cow ends by its selling. The date of the purchase can be determined by our simple rule of thumb: we sell the cow if it reaches either the 6th mastitis, or its 10th year of living.

Having a model for the financial description for a cow, we simulate 100 times the possible outcome to have an approximate stochastic description of the distribution function of the profit. Then we can determine an optimal decision on the expected achievable profit.

We use cookies on our website to give you the most relevant experience by remembering your preferences and repeat visits. By clicking “Accept”, you consent to the use of ALL the cookies.
Cookie settingsACCEPT
Manage consent

This website uses cookies to improve your experience while you navigate through the website. Out of these, the cookies that are categorized as necessary are stored on your browser as they are essential for the working of basic functionalities of the website. We also use third-party cookies that help us analyze and understand how you use this website. These cookies will be stored in your browser only with your consent. You also have the option to opt-out of these cookies. But opting out of some of these cookies may affect your browsing experience.
Necessary Always Enabled

Performance cookies are used to understand and analyze the key performance indexes of the website which helps in delivering a better user experience for the visitors.

Analytical cookies are used to understand how visitors interact with the website. These cookies help provide information on metrics the number of visitors, bounce rate, traffic source, etc.

Advertisement cookies are used to provide visitors with relevant ads and marketing campaigns. These cookies track visitors across websites and collect information to provide customized ads.

Other uncategorized cookies are those that are being analyzed and have not been classified into a category as yet.